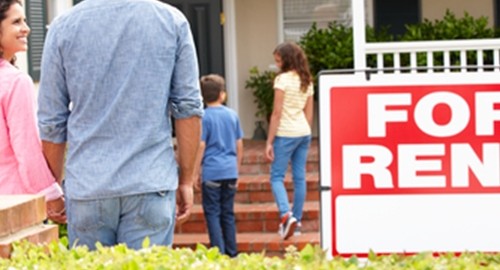 Julie Stackhouse, senior vice president of the Federal Reserve Bank of St. Louis, said rentals could help a bank, as rental market trends are favorable and the move could stabilize home prices in certain neighborhoods, which would allow banks to recover more money.

"The demand for rentals is up," she said. "Using rentals for a period of time allows an area to return to a more normal environment."

Truman Bank, based in Clayton, has been dabbling in the new market. Truman's long-term goal is to find buyers for the properties, said CEO Erik Beishir, but the bank is willing to endure the headaches of being a landlord for the short-term.

Truman specifically has struggled with high levels of commercial and residential real estate loans that went into default. The bank has been warned by regulators to clean up its bad loans and boost its capital levels. For all St. Louis-chartered banks though, the amount of 'other real estate owned' (OREO) properties quadrupled since the first quarter in 2008, jumping from $113.6 million to $485 million this year. With numbers like that, it could point to more bank-owned homes being converted into rentals.

Larger banks, such as U.S. Bank and First Bank, said they have no intentions of renting homes. But, Bank of America launched a pilot program in March, called Mortgage to Lease, for customers facing foreclosure to stay in their homes and pay rent instead of a mortgage.

Regardless of whether landlords are individuals or large corporations such as banks, lenders would benefit from investing in an amortization calculator and loan servicing software to help keep tabs on payments.